Our home was invaded by Androids

Not to be confused with Droid, which is a specific model of smart phone made by Motorola and apparently favored by a meth-addled geeks whose skin tends to fall off revealing surgical titanium robotic appliances where their hands ought to be.

No, not Droid. Android.

Android is the basic software at the core of a growing number of phones made by many manufacturers and carried by all the major carriers. These days, Android phones are outselling iPhones -- to the likely annoyance of Steve Jobs.

The Android phones that invaded our home last week are part of the Galaxy S family, made by Samsung and sold by T-Mobile under the name Vibrant. And they are vibrant, because their screens use a technology that makes the colors knock your eyes out. They are marketed as entertainment phones: 5 megapixel photography, 720p high definition video, stereo Bluetooth streaming, and  games galore (Sims 3 included). They can be hooked directly to your flat screen television. The phone includes a built-in copy of the complete movie Avatar. (No, not 3D.) 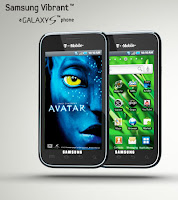 All well and good. But it also turns out that the Android is a Social Networking Command Center, as I discovered with an hour of turning the thing on. The phone somehow found out that I had Facebook and Twitter accounts. Next thing I knew, all my Facebook friends and all the people I follow on Twitter had been sucked into my address book (with photos and birthdays), and my Facebook and Twitter feeds were scrolling down my home screen in vivid color, at DSL speeds.

If I am looking at so-and-so's page in the address book, one click gives me her latest Facebook/Twitter updates. Another click shows me any pictures she has posted on her wall. And of course I can post my comments on her page, directly from the phone.

If you are addicted to social networking, this phone is to die for. (But please don't do it while driving your car.)
Posted by Michael at 11:05 PM