Just about everything I'd say, and then some, is in this very good article about password security: How I'd Hack Your Weak Passwords.
Posted by Mike at 1:27 PM No comments:

Millions continue to leave themselves vulnerable


Even though over 80% of email users are aware of the existence of bots, tens of millions respond to spam in ways that could leave them vulnerable to a malware infection, according to a Messaging Anti-Abuse Working Group (MAAWG) survey.

In the survey, half of users said they had opened spam, clicked on a link in spam, opened a spam attachment, replied or forwarded it – activities that leave consumers susceptible to fraud, phishing, identity theft and infection. While most consumers said they were aware of the existence of bots, only one-third believed they were vulnerable to an infection.

A blog of my own

I've started and managed several blogs for other people and other purposes, but now I'm finally going to have a blog of my own. A personal blog. I haven't decided what all I might blog about, but I'm certain to cover these two topics:

New Yorker Magazine holds a weekly, online contest where they provide a cartoon and you write a caption for it. The winner gets his caption published in the printed magazine, and an autographed, framed copy of the cartoon.

This week (#230) I submitted the caption below, but I wasn't even selected as a top-three finalist! I hate for my creativity to go to waste, so I'm publishing it myself. 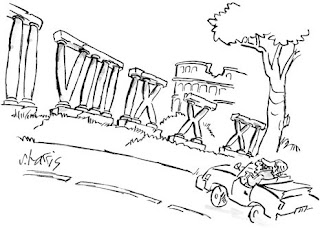 Be wary of fake online ads

According to a Wall Street Journal article, some major web news sites aren't checking their advertisers' ads carefully enough. Hackers are taking advantage of the situation, buying space and posting fake ads for real companies. Click the fake ad and you're taken to a fake site where you could unknowingly download viruses and malware.


EWeek.com, a technology news site owned by Ziff Davis Enterprise, in February displayed an ad on its homepage masquerading as a promotion for LaCoste, the shirt maker. The retailer hadn't placed the ad -- a hacker had, to direct users to a Web site where harmful programs would be downloaded to their computers, says Stephen Wellman, director of community and content for Ziff Davis.

Similar attacks occurred across a series of News Corp.-owned sites in February, including AmericanIdol.com, FoxNews.com and IGN.com. In January, clicking on an ad on Major League Baseball's MLB.com led visitors to a site with malware.

Safety tip: Don't click those ads, even if the offer is enticing. Go directly to a company's site if you're truly interested in their products. If you don't know how to find the company's site, do a Google search.
Posted by Mike at 7:00 PM No comments: